Your Insider Ticket to the Oshkosh Air Show 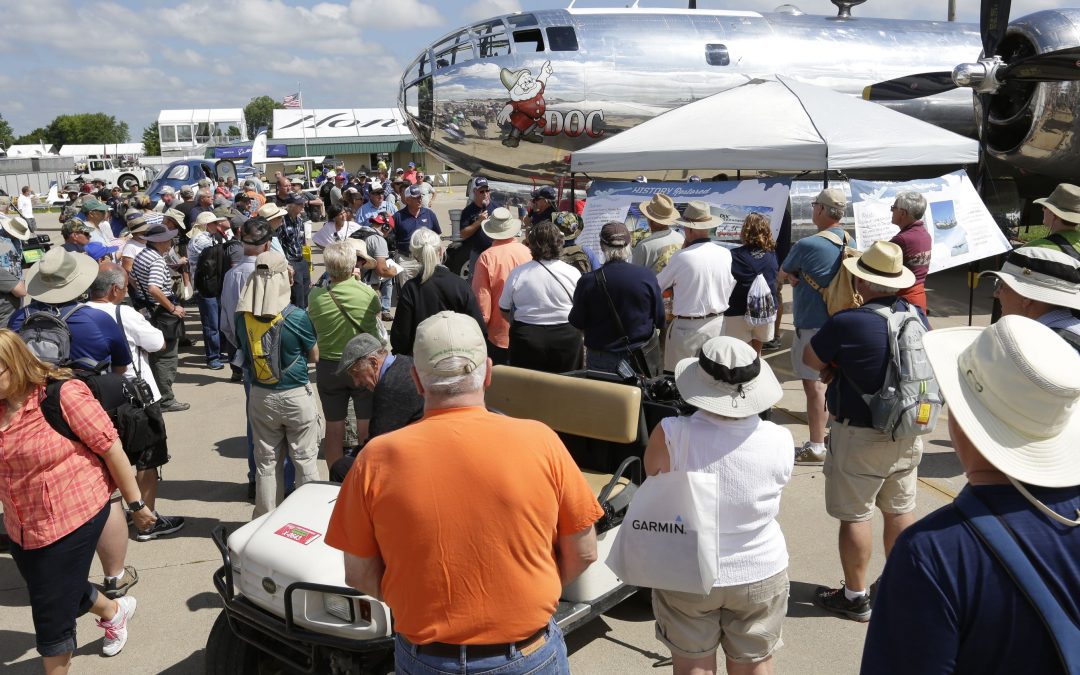 There are hundreds of air shows held annually in the U.S., and the Oshkosh Air Show is a fan favorite.  Sometimes called the EAA AirVenture Oshkosh or Airventure for short, the week-long extravaganza draws a huge crowd to the small town of Oshkosh, WI every July.

The event is put on by the Experimental Aircraft Association (EAA), an organization that boasts members worldwide and is the largest of its kind.

In this insider guide, we’ll tell you everything you need to know about this annual Oshkosh event.  We’ll delve into the history of the EAA and give you a snapshot of some of the significant historical debuts the event Air Show has hosted through the years.  We’ll tell you about the expected attendance, and how to get involved if you want to volunteer in the future.  Finally, we’ll give you a sneak peek at some of the highlights you’ll see in 2018 so that you can plan your week around the can’t-miss attractions.

What is the EAA?

The Oshkosh Air Show couldn’t be possible without the support and organization from the EAA.   Despite being the largest organization for aviation enthusiasts in the world, it’s less than 100 years old.  They were founded back in 1953 by Paul Poberezny who wanted to create a space where people who were interested in building their own airplanes could meet other like-minded individuals.

They held their first fly-in that year in September and had just a few airplanes and around 150 attendees at the event. Only six years later, in 1959, the annual EAA fly-in outgrew their original airport and had to move to a larger venue in Illinois.  Then in 1970 attendance grew to the point that they had to search for an even larger facility, which is how they ended up in Oshkosh, Wisconsin for the annual show.

In those early years, the event was named the EAA Annual Convention and Fly-In and only changed their branding to AirVenture Oshkosh in 1998.   Many other things changed, improved, and evolved along the way as well.

Since its inception, the EAA has expanded their goals and now includes a wide range of aviation niches in their membership base.  They have builders and restorers as well as recreational pilots who are passionate about everything from classics to warbirds, as well as more modern aerobatic aircraft, helicopters, and ultralights.

The fly-in itself now boasts a full week of events, including over 1,000 different workshops for EAA members and the public as well as shows, stunts, and viewings of incredible flying machines. Thanks in part to the notoriety and support from the EAA, the Oshkosh Air Show has hosted many notable debuts of revolutionary aircraft designs through the years.  Here are a few highlights.

Richard VanGrunsven, known for building more homebuilt aircraft than anyone else worldwide, debuted his Van’s RV-3 at the show in 1972.

A few years later, in 1975, homebuilder Burt Rutan change the aviation industry when he introduced his VariEze Canacard design at AirVenture.  This aircraft was notable because it was the first to use moldless glass-reinforced plastic in its construction.  Many homebuilt aircraft adopted his model, including composite commercial airliners.

Another innovation that came onto the scene at Oshkosh was an all-composite fiberglass construction technique that featured glass panel cockpits and ballistic parachutes in the airframe.  This was thanks to the Klapmeier brothers who showed off the technology in 1987 with their Cirrus VK-30 kit aircraft.

The annual Oshkosh Air Show has grown significantly since 1953.  In 2017, over 590,000 people attended the event throughout the week.   These visitors were comprised of people from 80 different nations, including Canada, Australia, and South Africa.

Over 10,000 different aircraft landed at the event.  Over the course of the week at the Wittman Regional Airport, there was an incredible amount of traffic to coordinate.  The EAA reports that there were around 123 takeoffs or landings each hour, and a total of 17,223 different airport operations during the air show.

People were pouring in to participate in all of the festivities that were offered.  Visitors viewed 2,991 different show planes, which was a five percent increase over the year before.  Included among these exhibits were over 1,100 homebuilt aircraft, 1,162 vintage models, and 351 impressive warbirds.  Also featured were 168 ultralight aircraft, 79 water worthy seaplanes, 60 aerobatic aircraft, 54 rotorcraft, and ten colorful hot air balloons.

Commercial exhibitors got in on the action as well and had over 880 booths at the event with a range of goods and services to appeal to visitors.  In addition, 1,050 workshop and forum sessions educated over 75,000 attendees on various aspects of aviation.

Not only did the Oshkosh Air Show reach the people on the ground at the event, but they also offered a plethora of online resources for those not able to attend.  They captured 15.4 million people via social media and had over 500,000 views on their web streams across 192 countries.

This enormous event requires a lot of men (and woman) power, and organizers admit that it couldn’t be possible without the over 4,000 volunteers who give their time to make it happen.  These individuals provided around 250,000 hours of their time leading up to, during, and after the event to get the Oshkosh Air Show off without a hitch.

There are hundreds of volunteer opportunities through the EAA for the annual Oshkosh Air Show.   The organization is always looking for people who want to help with a variety of tasks before, during, and after the event.  You can apply on their website and may be asked to do things like park cars, set up and tear down the venue, register guests, direct traffic, and more.

There are some significant perks to volunteering your time, especially if you help out for several years in a row.  You might qualify for a t-shirt, free admission to AirVenture, or a free meal. Organizing the annual Oshkosh Air Show takes months of advance preparation, and plans are already well underway for both the 2018 and 2019 extravaganza.  These are the dates for the future events.

Although there are an endless array of things to do, there are a few must-see attractions at the 2018 Oshkosh Air Show.  Here are our top picks. 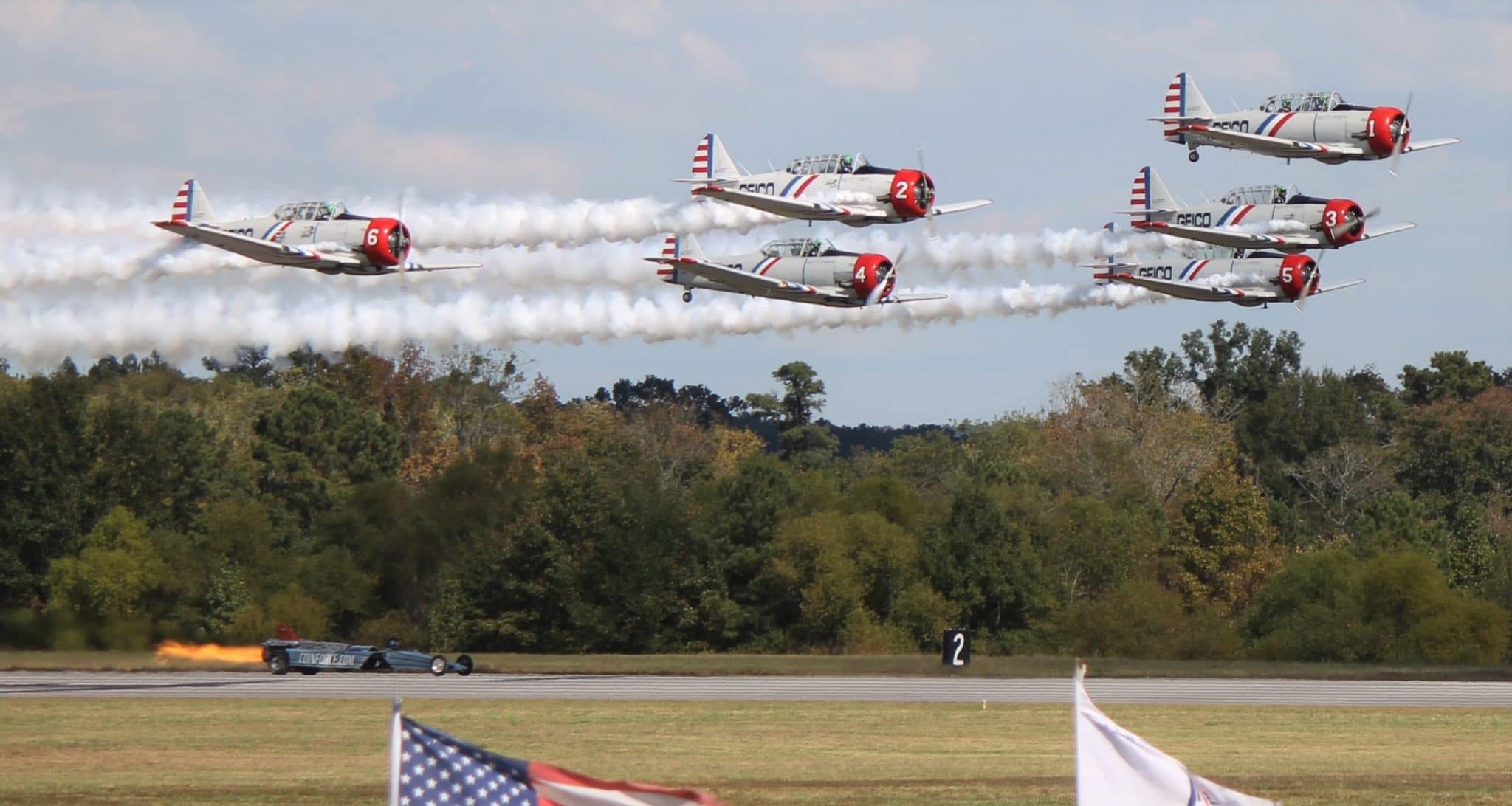 Year of the Tanker Exhibit

In 2018, the Air Force Reserve celebrates their 70th anniversary attending AirVenture, and they are bringing a fleet of military refueling aircraft to the party.  The “Year of the Tanker” exhibit will include the KC-10, KC-46, KC-135, and the HC-130P/N.

In addition, the Air Force Reserve Command will have operational aircraft at the show to create a display that showcases the past, present, and potential future technology of tanker aircraft.

A fan favorite from years past is returning to Oshkosh in 2018.  Join thousands of other air show attendees in helping to build a complete airplane over the week-long event by visiting the exhibit and putting in a bit of elbow grease of your own.

The Royal Air Force celebrates their centennial in 2018, and they plan to make an impression at the air show.  They’ll participate in special programming that includes showcasing their impressive historical aircraft and doing flyovers throughout the week.

If you can’t make it out for the entire week, you won’t have to worry about missing out on one of the best parts of the event.  At Oshkosh, there are daily air shows where acrobatic pilots perform amazing flyover and stunts that will leave you breathless and on the end of your seat.  Be sure to bring a lawn chair and some refreshments because you won’t want to move once the action gets started.

It’s not every day you get to see some of the oldest jet aircraft in the world flying overhead, but at the 2018 AirVenture, you’ll see more than one.  Assuming no mechanical issues, a British Meteor is the main attraction.  The oldest flying original jet that still exists today will be coming in from the United Kingdom for the event.

If you’re a long-time fan of the Oshkosh Air Show, you know that skydiving activities have always been part of the event.  However, in 2015 AirVenture debuted a mass parachute jump demonstration that had the crowd going wild, and since then they’ve worked to incorporate even more parachuting into the show.

In 2018, four separate elite groups will participate and put on incredible displays while jumping out of perfectly good airplanes.

The Patriot Parachute Team will put on a patriotic display featuring the American flag during the national anthem, and then return for an encore performance where they will demonstrate what it takes to become an elite Navy SEAL.  Finally, they’ll perform a once-in-a-lifetime pyrotechnics night show where the team will do maneuvers that they are the only ones ever to master and showcase.

The largest skydiving group at Oshkosh is the International Skydiving Museum Eagles.  They have over 100 jumpers from 10 countries and feature intricate formations at up to 120 miles per hour in their show.

Daredevils from the Red Bull Air Force will perform both day and night shows that feature low-altitude base jumps, a first for AirVenture, out of their famous Red Bull Helicopter.

Another night show attraction, Vertical Elite, uses LED visuals, pyrotechnics, and whiz through the air at 170 miles per hour before pulling their chutes. 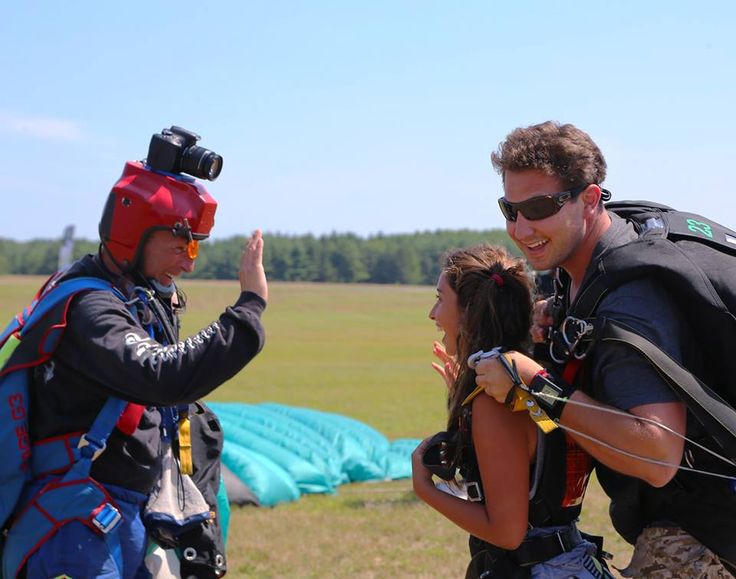 Although the event doesn’t sell out, there are perks to buying tickets early.  There is special discounted pricing available online until around a month before the big day.

You can purchase single-day passes, a weekend pass, or a ticket to get in and enjoy the entire week of festivities.  Packages for EAA members and non-members are available on their website.

As an Amazon Associate, this site earns from qualifying purchases. We may also earn small commissions on purchases from other retail websites.